When Over-the-Counter and Natural Remedies Don't Work, Here's How You Can Treat Toenail Fungus in Indianapolis

Toenail fungus (onychomycosis) is common in humans, and can be contracted at any age and degree of health. Fungus is a microscopic organism that is found all over, especially in warm, dark, moist environments where it thrives. Fungus can be spread from person to person, especially in moist areas like showers and locker room. The fungus that causes nail infections usually starts on the skin, where it is common known as an Athlete's foot infection. Eventually, the fungus will migrate along the skin to the areas surrounding the nails. Whenever there is a crack or break in the nail tissue, the fungus will be allowed access to the region underneath the nail. This region is called the nail bed, and is essentially the skin surface over which the nail tissue rests. Once the fungus penetrates this area, it multiplies slowly over time, using the overlying nail as a scaffold from which to live. Fungus can spread along the skin to multiple nails in this manner, slowly infecting nail to nail, or all at the same time.

The infection will begin to change the appearance of the nail once it has stayed under the nail for awhile. This is due to the destruction of nail tissue and production of skin debris that forces the nail upward, discoloring it in the process. The nail will thicken, become crumbly, loosen, and become generally misshapen. Color changes can vary from white to yellow to brown/black. It should be noted that not all color changes to a nail are due to a fungus. Other conditions can change nail color, including simple things like nail polish surface residue (white patches), all the way to rare and uncommon cancerous melanoma (black streaks). As the toenails thicken, they can potentially become painful from shoe pressure. Some nails even fall off completely. 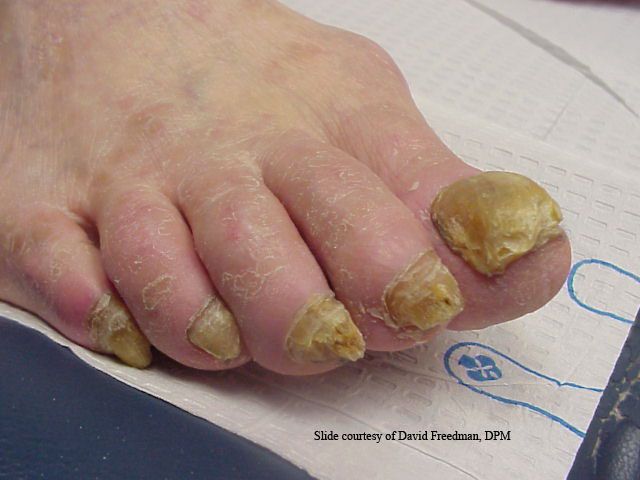 Nail fungus infection is difficult to treat, and will never go away on its own. Specialized medication is needed to destroy the infection at it's source: underneath the nail. Store-bought and most prescription anti-fungal topical medications are essentially useless for this condition, as are numerous 'natural' remedies that studies have failed show effectiveness. These treatments simply fail to absorb through the nail to get at the skin surface underneath. The nail tissue is difficult to penetrate effectively, and these treatments are limited to the tissue directly on top of the nail or the skin alongside it. The most effective way of getting medication to the infection source is through the blood stream underneath the nail. This is done by taking a pill, which then absorbs into the bloodstream through the stomach. The oral medication will slowly destroy the fungus at it's source over a three month treatment period. As the nail continues to grow following this period, the new nail developing from the skin base will not become infected, and the nail should be cosmetically improved after it has fully grown outward. The oral medication is generally safe and effective (75% or more), but should not be used in those with current or past liver disease as it has the very rare potential to cause liver damage itself. Interactions with other medications are low in number, and the medication is now inexpensive as it is in generic form. There are a couple of topical medications that have demonstrated effectiveness in treating toenail fungus. The preferred medication of these is non-prescription due to its safety (but dispensed only by physicians). It is an oil-based anti-fungal medication that is brushed on the nail. The formulation helps it to penetrate the nail surface. Its manufacturer also provides a money-back guarantee if it is not effective. The other alternate is a relatively expensive prescription lacquer that is brushed on the nail. The effectiveness of either of these topical medications is not as high as the oral medication, and they must be used for six to eight months to achieve results. However, they are a great alternative to the oral medication if one has liver problems, or does not want to take yet another pill. They are particularly preferred if the infection is just beginning with very little nail changes already present.

Following treatment, the skin around the nails should be treated to remove any fungus build-up that can cause reinfection. This can be done as infrequently as once per week, and can last until the nail grows out completely, or longer if one desires to prevent reinfection in the long term. It would seem that some people are more likely to contract toenail fungus (as are some nails even as evidenced by fungus skipping over nails). Long term control of skin fungus is important in these individuals to prevent the fungus from re-entering the nail tissue.