Gout is a severely painful joint condition that affects millions each year. It has very specific symptoms, and can usually be easily differentiated from other forms of arthritis. These symptoms include swelling, heat, and redness around a joint, with severe pain to even the slightest touch (such as with a bed sheet), as opposed to other forms of arthritis where pain is not as acute. This condition usually affects the big toe joint or ankle, although the toes can also be effected. The pain begins suddenly without any injury, and can last for a week or two if untreated. The redness stays near the joint, as opposed to infection which spreads up the foot or leg.

Gout is a result of the body's inability to remove uric acid, a crystal shaped chemical that forms as a result of the body's breakdown of certain foods. Certain medications can also contribute to this. Normally, the kidney removes uric acid quickly from the blood stream via urine. When someone has gout, the uric acid remains dissolved in the bloodstream until it reaches the concentration point in which it cannot stay dissolved. The uric acid returns to crystal form and deposits itself into areas of lower body temperature, usually in the feet or knees. The presence of these crystals creates a severe inflammatory reaction which causes all of the symptoms. Eventually this reaction resolves. Over time, numerous gout flare-ups can eventually cause joint damage as the material left behind by the disease (a chalky white uric acid residue called tophi) harms the joint tissues.

Gout is diagnosed primarily through its symptoms, although the uric acid level can be measured in the blood. However, in many cases, the uric acid blood levels will be normal during an acute attack as the uric acid will have been deposited in the joint and out of the blood stream. Other tests performed outside of an acute gout attack can be more reliable, and are used to determine the uric acid production over a 24 hour period. The most accurate way to diagnose gout is to obtain a sample of joint fluid to study under a microscope. While painful during an acute attack, this procedure provides a direct means for a lab to analyze the joint fluid for uric acid crystals.

Treatment for gout involves the use of anti-inflammatory medications to reduce the inflammation more quickly than the self-resolution that usually occurs with gout after a week or two. The quickest acting medication is called colchicine. While highly effective against gout, it can cause significant stomach upset and has to be adjusted if one has kidney disease. Non-steroidal anti-inflammatory medications like indomethacin and naproxen can also be used to reduce the inflammation of the gout attack. Oral or injected cortisone-like steroids can be used as well. For control of repeat attacks, certain medications can be used to control the uric acid levels in the blood over a long period of time. A change in diet is needed to prevent repeat attacks, and also adjustments of any medications that may contribute to gout. At times, the joint damage caused by repeat attacks requires surgery to repair, or at least to clean out the gout deposits. Certain patients may need the expert care of a joint specialist (rheumatologist) to control their gout more effectively. 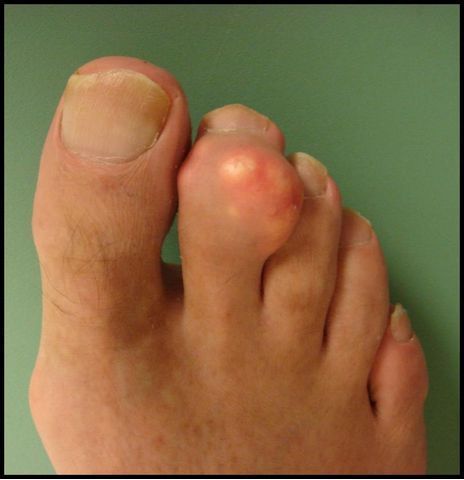